When the 25 year old son of a Protestant Christian woman, in the southern Kyrgyz city of Osh, died in a car accident in early August, city authorities and a local Imam refused permission for him to be buried in their local cemetery. 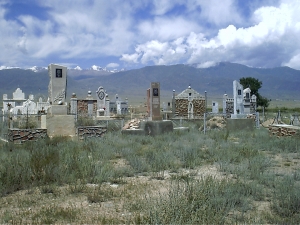 The Church members asked Forum 18 not to publish their names, or the names of the woman or her relatives, for fear of state reprisals.

In an interview, Church members related: “After negotiations with the Osh City authorities, they were allowed to bury him in a different cemetery, in a District of Osh far from their home, where adherents of various religions are buried.”

“[But even this was only permitted] under pressure from the local Imam who recited Muslim prayers, [after] the mother was made to renounce her Christian faith.”

Local Muslims and Muslim leaders, with the agreement of local authorities, have long obstructed or denied burials to deceased Protestant Christians, especially those of ethnic Kyrgyz or ethnic Uzbek background.

The argument given is that these village graveyards are only for Muslims, and the local authorities appear content to allow local Imams to control who is buried in state-owned cemeteries. Police often back the obstructions of burials, in some cases actively participating in the process.

The authorities’ failure to ensure people the right to bury their dead in the way they wish causes deep distress to the family and friends of the dead and their communities.

Psalm 23 vs 4: “Even though I walk through the valley of the shadow of death, I will fear no evil, for you are with me; your rod and your staff, they comfort me.”