Afghan forces have been battling Taliban fighters to retake the city of Kunduz, a day after it fell to the insurgents in their biggest victory since their removal from power in 2001.

Heavy fighting has been reported, and President Ashraf Ghani said his forces had regained some government buildings. 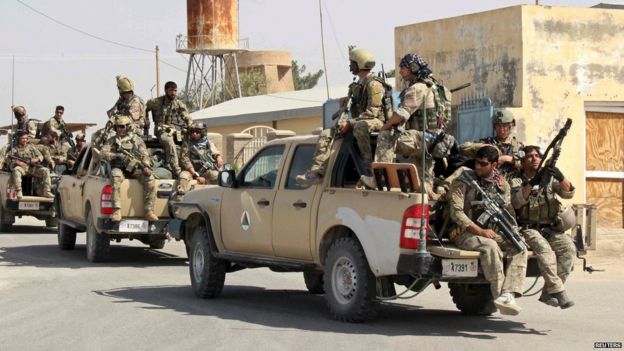 The surprise attack on the key northern city came as President Ashraf Ghani completed his first year in office.

In a televised address on Tuesday, President Ghani said “progress” was being made recapturing Kunduz, but security forces had been hampered by the Taliban using civilians as human shields.

“The government of Afghanistan is a responsible government and it cannot bomb its people and compatriots inside the city, and will not do so,” he said.

Medical charity, Medecins Sans Frontieres,‎ said its hospital in the city had been overwhelmed, with scores of patients suffering gunshot wounds.

Kunduz is the first provincial capital to be seized by the Taliban since they lost power in the US-led invasion 14 years ago.

An eyewitness in Kunduz told the BBC that Taliban reinforcements arrived on Tuesday, and the situation in the city was too dangerous for locals to leave.

The Taliban’s new leader, Mullah Akhtar Mansour, said the government should admit defeat. Kunduz residents “should not be worried about their lives and property” and should “continue as normal”, he said in a statement.

But the eyewitness said that while some locals had welcomed the Taliban, “most people are out there (on the streets) out of fear, and not out of sympathy”.

Isaiah 45 vs 8: “Shower, O heavens, from above, and let the skies rain down righteousness; let the earth open, that salvation may spring up, and let it cause righteousness to sprout up also.”