Algerian Believer Sentenced to a Year in Jail

PrevEgypt’s President Promises to Build a Mega Church.
NextPray for Kyrgyzstan as Plane Crashes into Village 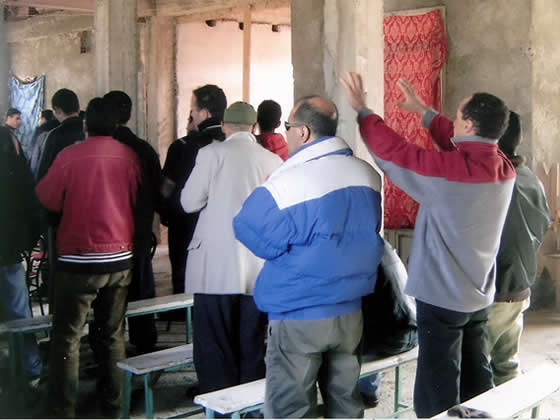 An Algerian Christian has been sentenced to a year in jail for a post he allegedly made on Facebook in December 2015.

Samir Chamek, 34, was found guilty of insulting Islam on the social media platform, Facebook, and was sentenced to a year in prison by the court in Bouira, Algeria, according to World Watch Monitor.

Chamek will appeal his sentence, and take his case to the Algerian Supreme Court.

The incident took place in December 2015, when Bouira Police’s cyber crime officials found pictures and comments on Chamek’s Facebook page, which were said to be “accusing the prophet Muhammad of terrorism and murder and comparing the prophet to Hitler, mentioning the persecution and massacre of the Jews”.

Chamek was detained by police and later released. He told World Watch Monitor: “I was arrested and taken to the police station, where I was interrogated for nearly five hours. I was asked to open my Facebook page, which I did.”

In July 2016, Chamek was fined 100,000 Algerian dinars ($900 USD). However, when Chamek appealed, the prosecution lobbied for a heavier sentence, and in October, he was given five years in jail alongside the fine. Chamek appealed that sentence, which has now been reduced to just one year in jail.

Chamek insists that he is not guilty. “I will appeal to the Supreme Court,” he told WWM. “I explained to the judge that I only shared publications from other people, and I do not master the computer and French (which many Algerians speak) very well.”

Another Algerian Christian, Slimane Bouhafs was sentenced to three years’ imprisonment in September 2016 for offending Islam on Facebook.

There are just 39,000 Christians among Algeria’s predominantly Muslim population of more than 40 million. Conversion from Islam, or an attempt to convert someone else, is illegal and many Muslim converts are forced to worship in secret.

Philippians 4 vs 6: “Do not worry about anything, but in everything by prayer and supplication with thanksgiving let your requests be made known to God.”