5 years ago, she was a ‘fanatic’ Muslim—now she follows Jesus

PrevRejected by Family, Harassed by Community, Accepted by Christ
NextPetition to Close Churches in SE Turkey 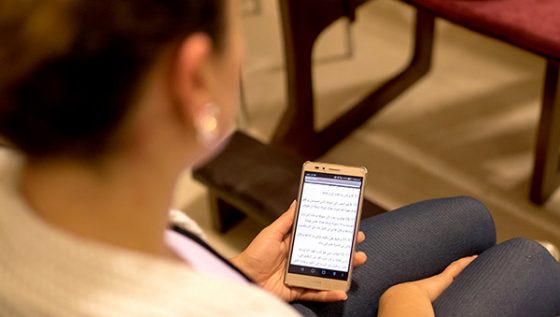 In a room in a secret location, somewhere in the Middle East, 12 young Christians sit in front of a whiteboard in a trauma care session led by an Open Doors’ counselor.

Farideh* is one of these 12 young leaders.

Five years ago, she was a devout Muslim—when she remembers herself in that period of her life, she calls herself a “fanatic” for Islam.

She was also hiding a secret: She was desperately afraid of so many things. She would harm herself, even to the point of considering suicide. She would lay awake at night, terrified of what would happen to her when she died.

But now, in this place, Farideh sits on the edge of her chair, taking in everything. In the exercise she’s hearing about, each person is invited up to the board to draw something on a figure that’s been put on the whiteboard. Each person changes the figure in some way, communicating their internal emotional trauma in a way that will help the others encourage and stand with them.

Despite the difficulty in sharing, Farideh shines with the opportunity to speak openly about her struggles with other Christians.
“Coming here feels like I stepped out of the darkness into the light,” Farideh says, with a shy smile when we sit down to talk in the hotel lobby after the session. She lives in a strict Islamic environment, a place where she has to keep her faith a secret to the outside world. She also has some stresses in her family life. Both of these realities visibly weigh on her.

“At home I feel like I have to be the strong one,” Farideh says. “I always have to take care of others. But here, I can talk to believers my age; here, people pray for me, and here, I can talk freely. And most importantly: it is here where I learned to listen to the voice of God.”

From terrible fear to a grateful hope

Farideh goes to a house church, but it hasn’t always been like that. If you would have seen Farideh walking down the street at that time, you would have guessed she was a convinced Muslim. “Only five years ago I was still a fanatic Muslim, trying to adhere to every rule,” she says. “When I went out of the house, my face would be covered until only my eyes were visible. Even my parents thought I was being a bit too strict!”

But Farideh says that, behind the veil, she was a fragile, suicidal girl. “At that time, I felt like I had no goal in life,” she remembers. “I would hurt myself to get rid of the many fears in my mind. And even though I tried so hard to be a good Muslim, I still worried: Where will I go to when I die?”

But then: Farideh’s father came to faith in Jesus. Farideh shakes her head as she remembers because when her father told her about Jesus, she didn’t see the light at first.

“I wasn’t interested in this ‘Jesus,’” she says. “I did ask my father questions, but that was just to get his attention; I really craved his attention.”

But Jesus didn’t give up on Farideh. One night, after she had cried out in hopelessness to Allah, or any other God that would listen, Jesus appeared in her dream. “I dreamed I was being chased by a bear,” she says. “My cries for help to Allah didn’t help. Then I remembered this Jesus my father always talked about and called out His name. To my surprise, the bear then disappeared.”

The dream had a big impact on Farideh; she gave her heart to Jesus. But Farideh’s story isn’t a fairy tale. After her conversion, there was no magic spell that made all her problems disappear. But she did find out she didn’t have to go through life alone: “I believed that Jesus could help me, so I surrendered my life, with all its problems, to Him.”

Raising a new generation for a secret church

The youth leadership training that Farideh went to is designed to help young people learn to lead and serve house churches in a strict Muslim environment. During a five-day program, the young adults in this training get in-depth Bible study, go through trauma care sessions together and have times of prayer and worship. They also get the chance to talk to leaders and counselors individually. Some participants are selected for a more intense training program, but all are encouraged to find their calling and strive to serve the underground church with their talents, whether they become leaders or not.

The project is needed because the majority of people in house churches in these places are from a Muslim background and are relatively new to faith. Bibles and other resources can be scarce, as well as experienced leaders and teachers. Meetings of the church have to be done in secret. If the house church is discovered, members often face violence and exclusion in different ways. Leaders are more likely to be targeted and this is why leaders regularly flee the country.

The vision is to have 20 house churches by 2020 that are primarily led by the younger generation of leaders whom Open Doors has helped grow in their faith and as spiritual leaders.

Last year Farideh had the chance to participate in this type of youth leadership training for the first time. This is a training sponsored by Open Doors, where young believers in Farideh’s closed society can come together and start to learn how they might someday lead in their churches. In a country where many believers are young in faith, and danger constantly puts pressure on Christians, Farideh wants to be educated to serve. “God called me to help traumatized people in the underground church,” she says. “I don’t have anyone in my small house church to help me, but I want to be that person for someone else in the future.”

It might seem a bit strange—a depressed former fanatic Muslim wanting to become a trauma care counselor. But Farideh believes that having to go through healing now will let her help other Christians going through the same feelings. “In the trauma care sessions, I experienced firsthand that you have to face up to your feelings and emotions,” she says. “I experienced that it is not always nice to look back at stressful memories, but that it is good in the long term.”

She shares how she used the teachings of the previous training. “In last year’s sessions we learned breathing exercises and how to express our emotions,” she says. “I took it for granted then, but when I came upon another stressful situation back home, I used it, and it really helped me.”During the evening worship session Farideh closes her eyes while she lifts her hands in awe to the Lord. She falls on her knees and whispers her prayers to God. In a few days she must go home. But she is refreshed and refueled and knows that wherever she goes she won’t be alone; He is going with her.