5 Years of Conflict in Syria

As Syria’s conflict enters its fifth year, there is a growing humanitarian crisis, which is only being exacerbated by the rise of the ISIL in the region.

The conflict began on March 15, 2011, as an anti-government uprising, with protesters taking to the streets having been inspired by similar revolts in Egypt and Tunisia. Since then, more than 220,000 people have been killed and half of the country’s population displaced, prompting rights groups to accuse the international community of failing Syria. 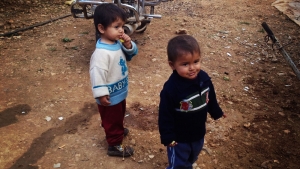 Marwan Kabalan, a Syrian academic and analyst at Doha Institute, told Al Jazeera that “Nobody really expected that we would reach this stage in which we will actually be having this national disaster in Syria. The heavy-handed approach that was used by the regime against the peaceful protesters was the main reason that this fairly peaceful revolution has turned into the sort of conflict that we are witnessing right now.”

The consequences of civil war have been devastating. According to the UNHCR, Syria is now “the biggest humanitarian emergency of our era,” with around four million people now living as refugees in neighbouring countries.

According to an Al Jazeera reporter, people in the refugee camps have lost hope that the war will end soon. “When you talk to people here, they have lost faith in the international community,” she said.

Inside Syria, more than seven million people have been displaced, and the UN says around 60 percent of the population now lives in poverty. The country’s infrastructure has been decimated, its currency is in free fall and economists say the economy has been set back by some 30 years.

And still, despite the international attention, there is very little prospect of a peaceful resolution of the conflict.

2 Chronicles 7 vs 14: “ if my people who are called by my name humble themselves, pray, seek my face, and turn from their wicked ways, then I will hear from heaven, and will forgive their sin and heal their land.”