A Small Tale of Survival in a Christian Ghost Town.

Seven months ago, the entire population of around 4,000 people fled Teleskof, a town on the Ninevah Plains in Iraq, ahead of an ISIL advance. However, two lone Christian women in their 60s remained, and are still the only residents of this ghost town east of Mosul.

“When ISIL, came all the people of our city fled, but I didn’t have any family or relatives and I wasn’t able to run so I stayed here. I had a friend left here like me and when I found out, the two of us got into a room, closed the doors and remained quiet.” said Sarya Matto, one of the two women now living in a tiny room with no electricity or services. 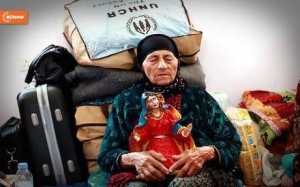 Matto and her companion said that 10 days into their hiding ISIS militants came knocking on their door. She recalled her ordeal with tears, saying she was trembling with fear the moment she faced the three militants: “Though our house was far from the city centre, 10 days later we heard human voices. Then they knocked on our door. They were speaking Arabic. We didn’t open the door but they broke it down and came in. They were three, wearing long beards. They asked us for money but we didn’t have any. They searched the house, then one of them saw my gold cross necklace and tore it from my neck. Then they beat us with their rifle butts and left.”

After 15 days of hiding in the dark room, Matto and her friend heard men speaking Kurdish outside, and they figured it was the Peshmerga.

“We immediately opened the door and we cried a lot when we saw them,” said Matto, remembering the evening at the end of August when the Kurdish Peshmerga recaptured Teleskof from ISIS. “They helped us. They brought us food and water.”

However, even though the town has been liberated from ISIL, Matto and her friend continue to be the only residents of this deserted town. No-one else has dared to return, as it is too close to the daily battles continuing with ISIL.

“No one in the world has done to anyone what ISIL did to us,”  Matto concluded, referring to the plight of tens of thousands of Christians killed, enslaved or driven from their homes by ISIL.

Psalm 9 vs 9, 12 and 18: “The Lord is a stronghold for the oppressed, a stronghold in times of trouble. For he who avenges blood is mindful of them; he does not forget the cry of the afflicted. For the needy shall not always be forgotten, nor the hope of the poor perish for ever”