A prominent Christian church leader has become the latest to be jailed by Chinese courts, during a week of activist trials and public confessions that have shocked international observers. 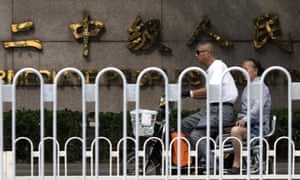 Hu Shigen, a leader of an underground church, was found guilty of subversion, sentenced to seven years and six months’ imprisonment and derived of political rights for five years.

Hu has previously spent 16 years in prison for other political offences, including sharing leaflets about China’s 1989 crackdown on protesters in Tiananmen Square.

A Chinese court in Tianjin, 60 miles south-east of Beijing, is this week rolling out a string of court sentences against human rights activists and lawyers that observers claim have almost zero credibility.

China claims that those facing trials have all conspired to overthrow the Chinese Communist party. State media on Wednesday said Pastor Hu had confessed to being deeply connected to “foreign anti-China forces”, and had conspired with members of the Fengrui firm about “how to get lawyers involved with sensitive incidents”. Lawyers from this law firm are amongst those facing trial this week.

Hu’s defenders say his main crime was advocating greater freedom of speech and religion, and leading underground Christian churches, which are unsanctioned by the Communist party.

Colossians 4 vs 3: “At the same time pray for us as well that God will open to us a door for the word, that we may declare the mystery of Christ, for which I am in prison”