Coptic Christians Fear for their Lives

It began on July 5, 2013, when President Morsi of Egypt was ousted. Muslim villagers in the Luxor region of Nag Hassan attacked Christian Coptics, killing four men and burning and looting over 40 homes belonging to Coptic Christians. Police rounded up 17 men accused of the attacks and their trial is due to start in April 2015.

There are several witnesses who are vital to the convictions but they are being constantly threatened, and indeed, some have been killed. The latest victim is Shahid Nesemis Saroufim, a witness 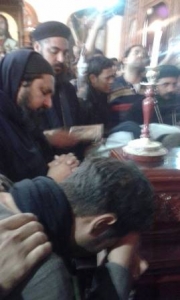 who was shot and killed in January this year. Saroufim was to be a witness in the trial.

Prior to this shooting, relatives of the 17 accused murderers had approached the Coptic church leader, Father Basilius Naim, asking him to arrange a reconciliation meeting with the victims’ families to persuade them to drop the charges. He refused, saying, “We can forgive our material damages … But, we cannot forgive the blood of our four martyrs.”

A relative of another witness said, “They killed Saroufim to terrorize us and pressure us to drop the charges against their relatives.” The community fears for their lives.