Education: possible for every girl?

Malala Yousafzai was shot because of her belief that girls should have the opportunity for education. While Malala continues to recover, and has vowed to continue to campaign for girls’ education, education for girls remains controversial in some Muslim countries. A worldwide petition that started after the Malala incident in Pakistan, soon gained more than a million signatures, calling on the Pakistan Government and the United Nations to provide education for all girls.

A few weeks before her shooting, Malala told friends of her determination to campaign for the 32 million girls around the world who are not at school. Official statistics released by the Federal Education Ministry of Pakistan give a desperate picture of education for all, espcially for girls. The overall literacy rate is 46 per cent, while only 26 per cent of girls are literate. Independent sources and educational experts, however, are sceptical. They place the overall literacy rate at 26 per cent and the rate for girls and women at 12 per cent, contending that the higher figures include people who can handle little more than a signature. There are 163,000 primary schools in Pakistan, of which merely 40,000 cater to girls. Of these, 15,000 are in Punjab Province, 13,000 in Sind, 8,000 in North-West Frontier Province (NWFP) and 4,000 in Baluchistan.

Religious conservatism, poverty, social structures including feudalism, early marriage, the value placed on a girl, all contribute to the lack of investment in education for girls. 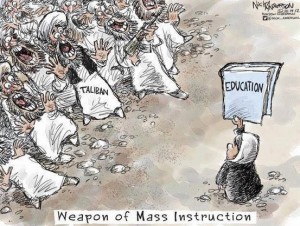 Education is a tool for change