God is at Work in the Middle East

PrevPray for Sudanese Pastors on Trial
NextForced Conversions in Pakistan
Pei Pei Khor
According to a missionary in the Middle East, a Saudi Sheikh who was responsible for training ISIS jihadists has reportedly asked for a Bible, having become sick at heart with the group’s brutality,
‘Julian’, who works with Operation Mobilisation and has lived in the Muslim world for many years, told Voice of the Martyrs Radio about accounts of Muslims in the Middle East, including members of ISIS, coming to faith in Christ. 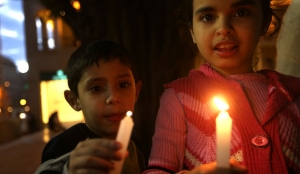 “God in his sovereignty is able to turn what is evil, and what the enemy intends for evil, into something that’s good,” he said.
He told of two accounts of people linked to ISIS coming to faith. The first was an ISIS fighter who had a vision of the cross. “For an ISIS fighter, that is not good news, that is bad news,” said Julian.
The militant went online and came across a Christian website and became more interested. He left Syria and went to Turkey, where he met someone who was able to tell him more about Jesus, and he came to faith. He shared his testimony at a church conference in Lebanon.
Julian had also heard about a Christian taxi driver in Lebanon who was driving a Saudi Sheikh to the airport when he asked to stop to get a Bible. He drove him to meet a Christian worker in Beirut who gave him the Bible and asked him why he wanted it. The Sheikh said he had been in Syria teaching the fighters “Jihad 101, the theology and practice of Jihad” and said he was “sick of the killing – there must be something better than this.”
According to Julian, “ISIS is being used to reveal something of the dark heart of Islam.” However he also emphasised that “many, many Muslims want to distance themselves and are embarrassed by {ISIS} … and we really should not see our Muslim neighbours as terrorists … but as neighbours.
“These are people who have been deceived, they are lost. We need to pray for God to call forth apostolic figures out of ISIS.”
He calls on Christians around the world to unite in prayer for ISIS militants, not against them.

Acts 26 vs 18: ” … to open their eyes so that they may turn from darkness to light and from the power of Satan to God, so that they may receive forgiveness of sins and a place among those who are sanctified by faith in me.”