Following the bombing of two churches in Nepal on 14th September, the radical Hindu organisation, Hindu Morcha Nepal, has published a press statement, calling for Christian leaders to leave Nepal, and for converts to Christianity to return to Hinduism. 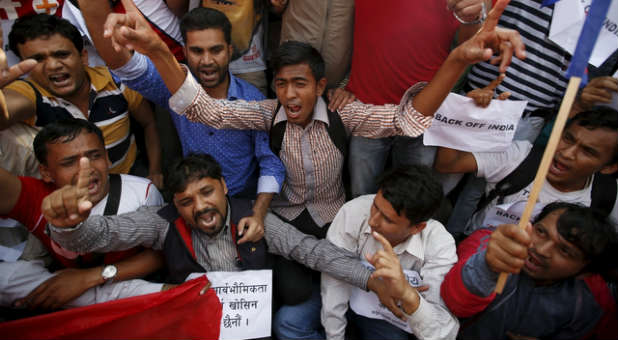 The group says the “Christianisation” of Nepal is the main cause of disruption to Nepal’s religious unity and that it wants Nepal to return to its former status as a Hindu Kingdom.

The statement declares: “From today, the Morcha declares Nepal a Christian-free Hindu nation. We warn all the Christian religious leaders to leave Nepal, and appeal to all those who converted to Christianity to return home [convert back to Hinduism].”

The group also demands serious discussions about amending the constitution, threatening strikes if no action is taken by authorities.

Hindu Morcha Nepal says the authorities did not take into account the will of the Nepali people when redrafting the constitution. Instead, they claim the government only considered the opinion of 2 percent of the population, which roughly equates to the number of Christians in Nepal.

Nepal became a secular state in 2007, after the abolition of the monarchy a year before, but the country has witnessed a rise in Hindu nationalism, led by the Rastirya Prajatantra Party Nepal (RPP-N).

Although Nepal has stayed secular, Christians remain fearful following the adoption of a new constitution, which includes the controversial amendments to Article 31(3), which now states: “Any act to convert another person from one religion to another, or any act or behaviour to undermine or jeopardise the religion of another [will be] punishable by law”.

Attempting to convert someone to another religion was already prohibited in Nepal, but the amendments mean that anything perceived as “evangelistic” is now punishable by law. Christians fear this could eventually render all Christian activity illegal.