PrevPakistan’s House Churches Get Freedom?
Next Atheism and agnosticism 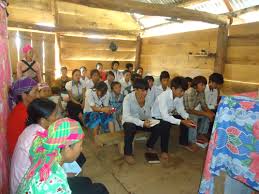 Four Vietnamese Christian families – 24 people in all – have been attacked by a mob led by the village chief, local sources have revealed to World Watch Monitor.

Four people were hospitalised for eight days after the 1 March attack, with injuries to their heads and arms.

All four families are from the Hmong people group and only recently converted to the Christian faith.

The provincial authorities had advised them against continuing with their newfound faith, World Watch Monitor understands, and village leaders told them that unless they renounce Christianity they will be forced to leave their village.

The families’ pastor is understood to be in talks with local authorities about the incident.

Vietnam’s Hmong live mainly in the country’s northwest and central highlands.Among the one million Hmong in Vietnam, there are an estimated 400,000 Christians – a higher proportion than in Vietnam’s population as a whole (about nine per cent). The religious transformation of the people group has been described as “remarkable”. The Hmong, just like Vietnam’s other Christians, face threats to their religious freedom through the government’s new Law on Belief and Religion, which came into effect this year and has, so far, been used to criminalise a Catholic mass.

The repression by the Vietnam government of religious and other freedoms has been raised at the 37th session of the Human Rights Council, currently meeting in Geneva.

President of the Paris-based Vietnam Committee on Human Rights (VCHR), Vo Van Ai, told the Council yesterday, (14 March): “Vietnam claims there are no political prisoners, only people who have ‘violated the law’. But the fact is that Vietnam’s domestic legislation is incompatible with international law. Instead of developing the rule of law, Vietnam is enforcing the rule by law, by adopting a whole arsenal of legislation that nullifies human rights”.

Pray for the Hmong Christians as they experience persecution. Ask God to strengthen their faith and give them the courage to stand strong in their walk with Christ.