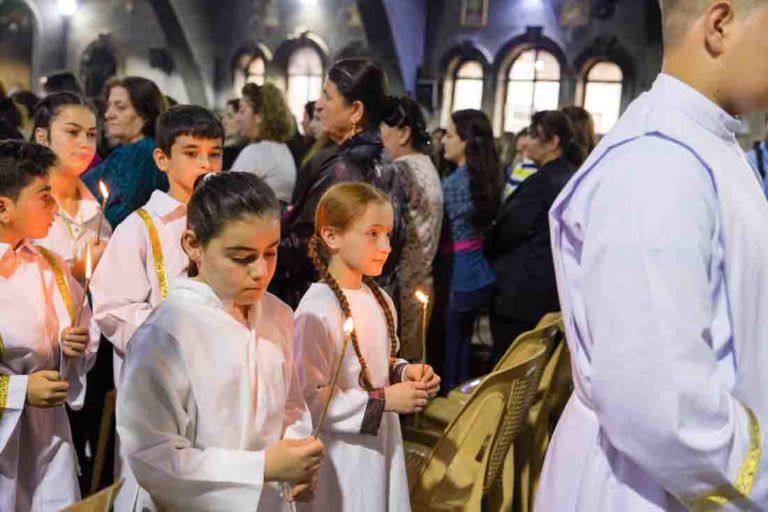 For the first time since ISIS drove all the Christians from Iraq’s Nineveh Plain in 2014, the Christian town of Qaraqosh celebrates Easter after many of its families returned. During this week leading to Easter, we visit Qaraqosh to meet with Christians there. Today on Easter Sunday, we meet with Father George Jahola, one of the key leaders of the restoration efforts in Qaraqosh.

“Like Christ rose from the dead, this community is rising from the ashes.”

This potent Easter quote from Father George Jahola actually says it all, as we speak with him in the Mar Behnam Church in the center of Qaraqosh. During ISIS’ occupation, the church building was used as a training ground to train new terrorists. Now, its halls are once again welcoming the believers who once worshiped there three years ago.

After staying in Qaraqosh for a week and talking to many Christians here, we’ve seen the community breathing again; growing, blossoming and radiating with new life. Yes, there are still serious problems and even fears and worries among the 25.000 returned Qaraqoshians, but something stronger than that is capturing this town: a new hope.

This Easter is especially significant for the Christians in this part of Iraq, George says. Like all church buildings formerly occupied by ISIS, the Mar Benham Church building is heavily damaged and burned.

Nevertheless each day of the week, services and prayer gatherings take place here. Believers are not waiting on the buildings to be fully restored to worship. Families who were internally displaced from their homes, communities and churches for the last three years are taking every opportunity to come together in Christ’s name.

“Celebrating Easter here in Qaraqosh sends an important message to the world,”says Father George. “Only a year ago, the city was empty. But now many people have returned. They rebuilt their houses and the churches are full again. Life has returned here.”

The local church is by far the most important factor in the rebuilding process that Father George oversees. He explains why the church took the lead: “We empower the population to stay here, and we fight for the existence of the believers in this area.Since our people had to run from ISIS, the church has been taking care of them and also now when they return. Nobody else takes care of these people.”

“We were helped by many organizations, including yours, he says gratefully. “Repairing houses encourages the population to stay here in Iraq and to witness their faith in this land.”

Father George has an Easter 2018 wish for Christians throughout the globe–that the new hope God has brought to Qaraqosh will travel around the world and inspire Christians to make their faith more visible. This, he says, is the most important lesson Iraqi Christians have learned from ISIS’ persecution.

“I hope that the Christians returning to this land will inspire Christians all around the world to not be shy about their faith.”