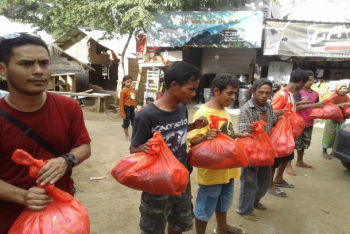 A parish that suffered damage in a deadly earthquake that recently struck the tourist island of Lombok in West Nusa Tenggara province has become an aid headquarters where Catholic groups, including Caritas Indonesia, are coordinating to help hundreds of thousands of victims.The 7-magnitude quake that hit Lombok and the neighboring island of Bali on Aug. 5 killed at least 460 people, displaced almost 418,000 and left about 7,770 people injured, according to the National Disaster Mitigation Agency.It came after another strong quake rocked the same region a week earlier, killing about 20 people.Around 71,000 homes were destroyed or suffered varying degrees of damage, while hundreds of places of worship were also damaged. Among them was St. Mary Immaculate Parish Church in the provincial capital Mataram. The church’s ceiling caved in, though its walls remained intact.  “Our aid center had to be housed in a garage because the church was damaged. We’re also using a Catholic elementary school located nearby to store aid supplies,” parish priest, Father Laurensius Maryono, told ucanews.com on Aug. 15.About 25 Catholic volunteers were working alongside people from Caritas Indonesia — locally known as Karina — and other groups to distribute aid material.”Some go into the field to collect information, some manage transportation, others deal with logistics while a few more man a media center,” he said.”Several dioceses will send supplies to the aid center over the next few weeks,” according to Caritas Indonesia director, Father Antonius Banu Kurnianto, who visited Mataram at the weekend.”We should see this disaster as a chance to show our solidarity with others,” he said, adding that the aid station would tentatively remain operating over the next 30 days.Meanwhile, disaster mitigation agency spokesman, Sutopo Purwo Nugroho, said the government has begun the first phase in dispersing funds for rehabilitation efforts. Money has been provided to rebuild homes for 1,191 families living in North Lombok, Central Lombok, West Lombok and East Lombok districts as well as Mataram. “The president [Joko Widodo] has ordered immediate help for local people so that they can rebuild their houses,” he said.Widodo earlier this week visited quake victims in North Lombok — the worst hit district.He said each family whose house was totally destroyed would receive 50 million rupiah (about US$3,448) to rebuild their homes, while other families would receive 25 million or 10 million rupiah, depending on the extent of damage to their property.