Authorities in Beijing and China’s coastal Anhui province have launched an investigation into the religious beliefs of university students, faculty and staff by issuing a survey with questions regarding religion. 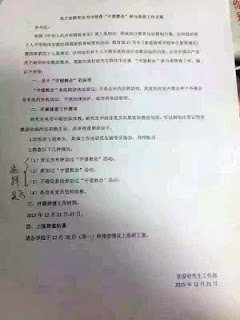 The survey sent to Beijing Technology and Business University reads:

“In order to implement the National Regulations on Religious Affairs according to the plans of the Party Committee, schools will collect statistics on faculty, staff and students.

1. Please designate if you have religious beliefs (if the answer is “yes,” please list what the religion is.)

2. If you are an academic advisor of postgraduates, please list the students involved in religions and get the statistics back before closing time on Dec. 23 via SMS, Fetion, WeChat, e-mail, telephone, etc. Please reply if you know someone [at the school] involved [in religion].”

Similar surveys were also sent to schools in China’s coastal Anhui province, according to students there.

Wang, a student at a Hefei, Anhui university, said: “Each class monitor is required to check whether or not each student has religious beliefs, targeting Christians in general. If you are religious, you have to go report everything about your church and other Christians.”

Another document, titled “Concerning the Plan to Investigate Graduate Students who participate in Shouwang Church,” was issued on social media. The document demanded that all graduate students who attend Shouwang Church, which has a branch at a Beijing university, be investigated within one week.

It also requested that all graduate students who are members of the Chinese Communist Party be investigated for religious beliefs.

Christians suspect that these measures are in preparation for a crackdown on house churches, with some church members claiming the government intends to launch another Cultural Revolution.

Despite this pressure, Christians are refusing to provide any information about their churches to the authorities in order to prevent persecution.

Psalm 20 vs 1: “The Lord answer you in the day of trouble! The name of the God of Jacob protect you!”