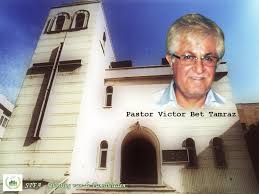 Iranian Christians request prayer for Pastor Victor Bet Tamraz (pictured) and Amin Nader Afshar. They and other Christians were arrested on 26th December 2014 at a Christmas celebration at Pastor Victor’s home.

In April 2017 Pastor Victor and Amin were informed that a hearing in their case would take place on 21st May at the 26th Revolutionary Court in Tehran with judge Mr Ahmad Por (known for the severity of his rulings).

Pastor Victor and Amin attended the hearing, as did Victor’s wife Shamiram and their son Ramiel. Also present was Hadi Askari who had been at Pastor Victor’s home in December 2014 when the arrests took place. Hadi was present in court as a witness but was not questioned at the hearing.

The hearing could not be concluded in Amin’s case because the judge had not provided all necessary documents to the defendant’s lawyer. It was agreed that the lawyer would meet the judge at a later date after she had examined the documents. As the cases of Pastor Victor and Amin are linked, no verdict was issued.

On 26th August 2016 Amin was arrested again at a picnic in Firuzkuh with Ramiel Bet Tamraz (Pastor Victor’s son), Mohammad Dehnavy, Amir Sina Dashti and Hadi Askari. Amin and Hadi remain in detention in Evin Prison in Tehran. The others have been released on bail.

Those arrested in August have been charged with “acting against national security” and “organising and creating house churches”. Ramiel faces additional charges of propagating the teaching of his father Pastor Victor.

Those close to Pastor Victor and Amin are thankful that the judge has agreed to meet the lawyer after she has had a chance to examine the relevant documents. They request prayer:

a. that the judge will reject the charges against Pastor Victor, Amin and the others, and that he will acquit them all

b. that Amin and Hadi Askari will be released from prison soon

c. that all who have been arrested will have their bail monies returned to them

d. that those responsible for the persecution of Christians in Iran will love mercy, act justly, learn about Jesus and choose to follow Him