Prev“Muslims are jumping into the net!” – Syrian Church Growing
NextWomen Central to the Church in Iran. 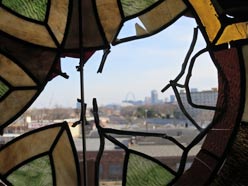 Nissar and his wife were brought up as Muslims, but 20 years ago came to faith in Christ. Since then they and their children have been regularly abused and attacked, told to move out of the predominantly Muslim area of Bradford, UK, where they grew up, and they have received death threats.

Their house has been repeatedly vandalised with anti-Christian graffiti, bricks thrown through the windows and their car set on fire. They were told that their terraced house would be burned down if they did not “repent” and return to Islam.

When Nissar reported this to the police he was told that such threats were rarely carried out and he should “stop being a crusader and move to another place”. Later the empty house next door was set on fire.

When Nissar spoke to the media the violence increased. The police only really began to take notice when security cameras, provided by Barnabas Fund, showed a large group of men savagely beating Nissar with pickaxe handles outside his home, resulting in him being hospitalised with a broken hand and kneecap.

A few months ago the threats against the family became so severe they had to move out of Bradford under armed police protection to a new home in a safer location that Barnabas Fund had helped them acquire.

In countries such as the UK, where sharia is not officially enforced, the sharia penalty for “apostasy” leads many Muslims to think it is legitimate to use threats, violence or other forms of intimidation to try to force Christians from Muslim family backgrounds to reconvert back to Islam. Despite this the UK government, along with other European governments, continues to ignore the problem.

The recently published Hate Crime Action Plan in the UK makes only a single token reference to anti-Christian hate crime, and, despite the widespread media attention the attacks on Nissar received – including on ITV news – the British government and Local Authorities still fail to even acknowledge the violence and intimidation faced by Christians and others who have converted from Islam.

Nehemiah 4 vs 9: “So we prayed to our God, and set a guard as a protection against them day and night.”