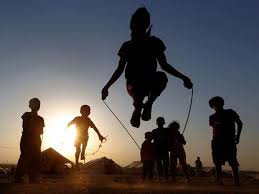 Muslims displaced by ISIS are embracing Christianity thanks to the witness of their children, who share with their parents the love of Christ. A ministry director working at a refugee in northern Iraq told Christian Aid Mission that recently, 600 children attended a program put on by the ministry, where they received Bibles and heard the gospel. After learning about Jesus, one 10-year-old boy decided to put his faith in Christ for salvation, the ministry director said.

“That night, we asked the kids to go tell their parents about what they had heard and share the story of Jesus with everyone,” the director said. “Mahmood’s father came the next day complaining to us about our influence in his kid’s decision to accept Christ.”

As a Muslim, the boy’s father was upset and fearful of community backlash after hearing his son say, “I became a follower of Christ.””His father had never heard a word about Jesus, so he gave us the opportunity to tell him about Christ and His salvation,” the director said. “Not long after that, he accepted Christ and took Bibles for his wife and two daughters.”

The ministry director revealed that other parents also approached the ministry director with complaints about their children. However, they, too, ended up accepting Christ. He gave them Bibles, and they told others of the peace and joy they had found in Jesus.”Mahmood’s father now has a Bible study in his house every Friday at 10 a.m. – the Muslim prayer day!” the director said.

Recently, the ministry team traveled to a town in western Iran known to have ties to Islamic extremism. After spending time in prayer, the missionaries went to the house of the village elder and religious leader and told him about Christ. His daughter was ill with asthma, so they prayed for her before leaving him with a Kurdish-language Bible, the director said. “The next day,” he said, “he phoned us and said, ‘My daughter has recovered, thanks to your prayers. Please, come back to the village and pray in every house and for everyone the same prayer that you prayed for her, and give Bibles to every house in the village.”

The team returned and distributed 500 Kurdish-language Bibles, and they prayed for and explained Christ to all who received them.

CAM notes that ministries based in Iraq are in ideal position to provide aid to those displaced by the ongoing battle against the Islamic State, as they can “purchase local items inexpensively, know secure ways to distribute them and are familiar enough with local cultures to introduce the Bible and gospel along with relief items.” However, they desperately need funding.