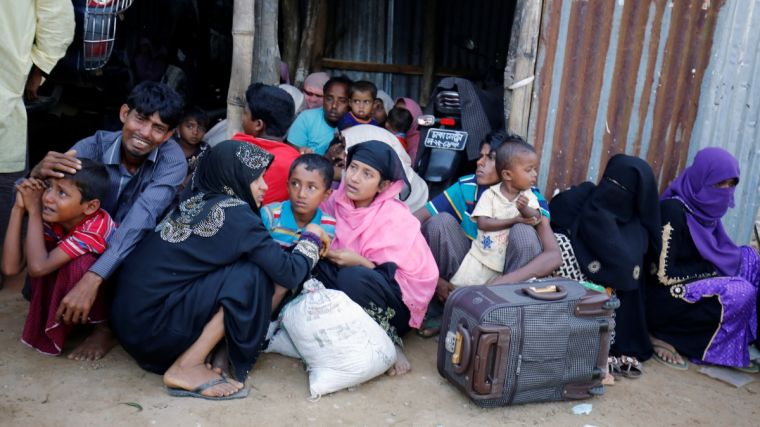 Aid workers are reporting that hundreds of Rohingya Muslims from Myanmar crossed the border into Bangladesh over the weekend, seeking shelter from escalating violence in the northwest that has killed at least 86 people and displaced around 30,000.

An official, who did not want to be identified, from the International Organisation for Migration (IOM), the United Nations’ migration agency, said he had witnessed more than 500 people enter its camps in the hills near the border on Monday.

Aid workers from other United Nations agencies, as well as Reuters reporters in the IOM camps, also reported seeing Rohingyas, who said they had recently fled the fighting in Myanmar. The UN workers did not give specific numbers, but expressed concern about a sudden influx of people.

The violence is the most serious since hundreds were killed in clashes in the western Myanmar state of Rakhine in 2012, and is posing the biggest test yet for the eight-month-old administration of Aung San Suu Kyi.

Soldiers have poured into the area along Myanmar’s frontier with Bangladesh, responding to coordinated attacks on three border posts on October 9th that killed nine police officers.

Moulavi Aziz Khan, 60, from a village in northern Rakhine, said he left Myanmar last week after the military surrounded his home and set fire to it.

“At that time, I fled with my four daughters and three grandsons to a nearby hill … later, we managed to cross the border,” he said.

Myanmar’s military and the government have rejected allegations by residents and rights groups that soldiers have raped Rohingya women, burnt houses and killed civilians during the military operation in Rakhine.

Myanmar’s army has declared an “operations zone” in the mainly Muslim northern area of Rakhine, where it says it is battling Islamist-inspired Rohingya insurgents, and international reporters are forbidden to enter the area to verify claims.

Myanmar’s 1.1 million Rohingya are viewed as illegal immigrants from Bangladesh by many of the country’s majority Buddhists. They are denied citizenship and face severe restrictions on their travel.

Proverbs 31 vs 8 – 9: “Speak out for those who cannot speak, for the rights of all the destitute.  Speak out, judge righteously, defend the rights of the poor and needy.“