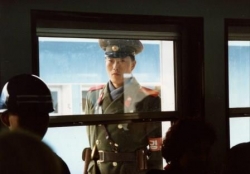 A North Korean military official recently defected into South Korea in search of something rare in North Korea – something that validated his Christian faith.

While at a resettlement center in South Korean for North Korean refugees, he met VOM workers who not only affirmed his faith, but shared how important it is for him to be a light in his dark country.

Known for being an exemplary military leader, he secretly followed Jesus with a small group of other Christian members of the North Korean People’s Army, he told the VOM workers. As they worshipped and discussed Christianity together, their lack of resources in the closed country kept them from knowing how to follow Jesus as members of the military.

“In North Korea, our leader has no God,” the soldier recently told VOM workers, “but in the American and South Korean army there must be many Christian soldiers. If they shoot at us, should we shoot back?”

A VOM worker shared a brief history of the Christian tradition during times of war and cited stories in Scripture that helped answer the soldier’s questions. The soldier listened eagerly and attentively at the answers he and many of his fellow soldiers longed for.

VOM works with numerous Christians fleeing North Korea and helps minister to those who’ve accepted Christ since defecting from the hermit nation. Along with job training and other skill development opportunities, we also provide Bibles and Christian resources to help North Koreans defectors grow in their faith. As a result, we’ve often seen defectors return to North Korea with the sole purpose of sharing the gospel.

That’s what led the military official to return, too. Having heard how he and other believers in the North Korean military can continue serving Jesus and sharing the gospel no matter their circumstances, he realized how important it was for him to go back. After all, he didn’t defect to seek safety or security, he defected to seek answers. The answers he received told him everything he needed to hear: Jesus is with him – even in North Korea.