They were a middle-class, Christian family in Pakistan, living in a comfortable three-bedroom apartment with a modern kitchen and a Play-Station for their three children. Fluent in English, the father ran his own moving company while the mother taught art.

But 18 months ago, everything changed. They received a death threat signed by an extremist group with three bullets attached to it, leaving no doubt as to the serious nature of the threats.

After hiding for a month, they packed two suitcases of their belongings and boarded a midnight flight for Bangkok, where they could enter on a tourist visa. However,  when they arrived in the steamy Thai capital, relief quickly turned to anxiety. The food, the language – everything was new.

Now they live in a barren room in Bangkok, where the children share a double bed and the parents sleep on the floor. They cook on a propane burner on a tiny balcony and a picture of Jesus hangs on the inside of the door. 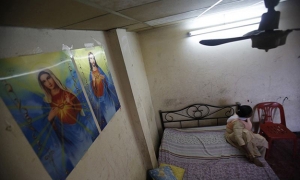 This family no longer fears for their lives, but they face other fears, such as arrest, hunger and the possibility that they will never be able to live freely. Unable to work legally and with no legal status in Thailand, they, and others like them, must remain mostly hidden while they scrape by on odd jobs and donations from churches, aid groups and individuals.

Their children, all primary-school age, do not go to school and spend their entire day indoors.

In Thailand alone, there are an estimated 12,000 religious minorities, including many Christians, who have fled Pakistan to escape persecution. However, they have to wait for up to 3 years for an interview with authorities, simply to establish their status as asylum seekers.

The father says they have no choice but to wait. He has no doubt what extremists will do if he returns: “I know they will kill both of us, my wife and me, and they won’t spare my children.“

So he waits and dreams of a life where they don’t need to hide and where his children can freely attend school. “We just want to go where our lives are safe,” he says with a sigh, “and we have some freedom.”