Pakistani Christian family flees after home set on fire, told they’ll be killed if they return 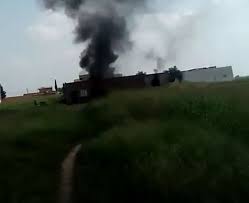 The only Christian family in their area were beaten and saw their house set on fire last week in a city in Pakistan’s Punjab province. Then they were told they will be killed if they return.

The family – an elderly couple with their four sons, daughters-in-law and 11 grandchildren – are now sheltering in a tent.

They say they were targeted by their Muslim neighbours and that they were assaulted by them six months ago but decided at the time not to press charges, hoping there would be no recurrence.

The incident took place on 20 September in Gujar Khan, Rawalpindi district, about 60 kilometres from the capital Islamabad. Newly appointed Punjab Minority Affairs and Human Rights Minister Ejaz Augustine has tried to intervene in the case and the local police have registered a criminal case, but no arrests have been made.

The Christian couple’s eldest son, 22-year-old Imran Masih, was hospitalised after the incident, but the hospital was slow to provide him with a medical certificate, according to human rights activist Khakid Shahzad. “Imran has been released from hospital and the medicolegal certificate was only issued after Ejaz Augustine intervened, which shows how influential these people are,” he said.

Bashir Masih, 72, and his wife Grace Bibi, 68, retired about three years ago as janitors from Gujar Khan Tehsil Headquarters Hospital and spent their retirement package on building a house in the area.

On 20 September, a power cut led Bashir Masih to leave the house to cool down, as the fans had lost power. Outside, he saw one of his Muslim neighbours, who asked him why he had left his house. Below is Bashir’s account of what happened next:

“I told him that there was no power and it was hot, so I have come out. He told me that none of us should be seen outside and then he, along with his brothers, beat me. My wife came to help me, but they beat her as well, tore her clothes and broke one of her fingers.

“Unlike the last time we were attacked, this time my wife and I went to the police station and submitted our application for the registration of a case. When these brothers came to know that we have filed an application, they became furious and called my son, Fiaz, on the phone and told him to leave the house within three days or they would kill every one of us.

“Then the next day, around 3pm, the brothers, and about 10 other unidentified persons, armed with firearms, sticks and torches lit with fire, first hit our main door and then scaled the boundary wall and entered our house. They started beating every one of us. My three sons, women and children – all were home because it was a public holiday.

“They beat our women and children and, when three of my sons tried to stop them, they beat them too with the butt of their guns and sticks. My son, Imran, had blood gushing out from his mouth and nose and he fell unconscious. Then they stole money and gold ornaments from our cases and set our household goods on fire, including a vehicle standing in the veranda.

“The police have registered a case but no progress has been made. Rather we are told not to go back to our home until we are told.

“The assailants are very powerful. They have connections with high-ups in government. Also they deal in drugs and illegal weapons so no one is willing to deal with them according to the law.”

Several human rights organisations have said they are seeking to help the Masihs, but for now the family remain on the streets.