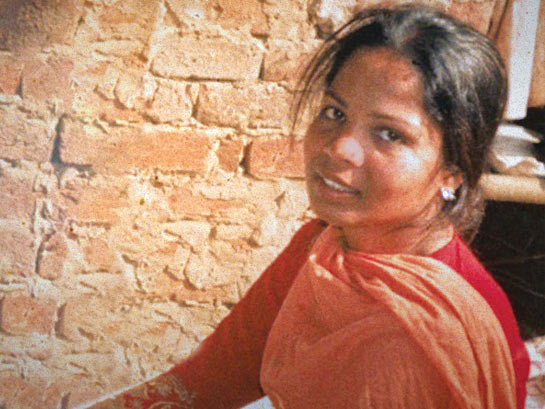 Pakistani Christian mother-of-five, Aasia Bibi, who has been on death row since November 2010 after being convicted under the country’s notorious “blasphemy law”, has been saved from hanging by a three-judge bench of the Supreme Court. The decision to acquit and release her was announced on Wednesday 31 October in a 56-page verdict.

Aasia reportedly told her lawyer, “I can’t believe what I am hearing, will I go out now? Will they let me out, really? I just don’t know what to say, I am very happy, I can’t believe it.”

“All my mother had done was take a drink of water”

The illiterate Christian farm worker had angered Muslim co-workers on 14 June 2009 by drinking from the shared cup when she brought them a bucket of water as they picked crops together on a sweltering summer’s day. The Muslims considered that her action made the water “unclean” for them as Muslims.

Heated words were exchanged, and Aasia Bibi allegedly said, “Jesus Christ died on the cross for the sins of mankind. What did your Prophet Muhammad ever do to save mankind?”  She was threatened, beaten up twice, arrested, imprisoned and the following year convicted under Section 295-C of the Pakistan Penal Code, for defiling the name of Muhammad. This crime carries a mandatory death penalty, although no one has yet been executed.

“All my mother had done was take a drink of water because she was thirsty,” said her daughter Eisham, now 18. As a nine-year-old, Eisham had seen her mother beaten and spat on by angry neighbours after the incident.

Violent reaction feared on the streets of Pakistan

Aasia Bibi’s case has received much publicity both in Pakistan and internationally. Her husband and children have lived in hiding for many years, being likely targets for assassination by zealous Muslims. Hardline Islamist radicals have made it clear for years that they will not accept anything less than death for Aasia Bibi. Following the verdict, the patron-in-chief of the Islamist Tehreek-e-Labaik political party is reported to have stated that the chief justice and those who ordered Aasia’s release “deserve death”. In 2011 two liberal politicians in Pakistan were murdered for speaking out on her behalf and calling for reform of the “blasphemy laws”.

The court’s ruling stated that “the prosecution has categorically failed to prove its case beyond reasonable doubt”. The judges also asserted, “it is not for the individuals, or a gathering (mob), to decide as to whether any act falling within the purview of Section 295-C has been committed or not”.

“Please keep praying,” came a message to Barnabas Fund from Pakistan shortly after the judges’ decision was announced and protest demonstrations began all over Pakistan. “We have deep concern over the security situation after the court verdict … this might lead to a fearful and violent situation for Christians.”