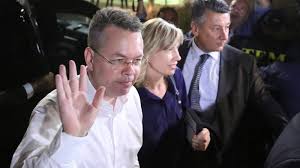 10/15/2018 Turkey (International Christian Concern) – Pastor Andrew Brunson was finally returned to the U.S. after two years of imprisonment in Turkey. The freed pastor from North Carolina called Turkey his home for the past two decades where he pastored a small church before his arrest.

The Turkish government accused Pastor Brunson of “committing crimes on behalf of Kurdish militants and to aid a Pennsylvania-based Muslim cleric”. Being branded a terrorist and linked to the failed coup attempt taken place in 2016, Brunson faced up to 35 years on jail if convicted of all charges.

Following Pastor Brunson’s release and return to the U.S., he was presented with the opportunity to pray over President Trump in the oval office this weekend.

The release of Pastor Brunson is also recognized as a victory for the Turkish Church. Leaders of the Greek Orthodox Church applauded the Turkish court’s decision to release Pastor Brunson. Some Christian leaders in Turkey are encouraged as they hope that the release of the pastor heralds a new era of respect for religious freedom.