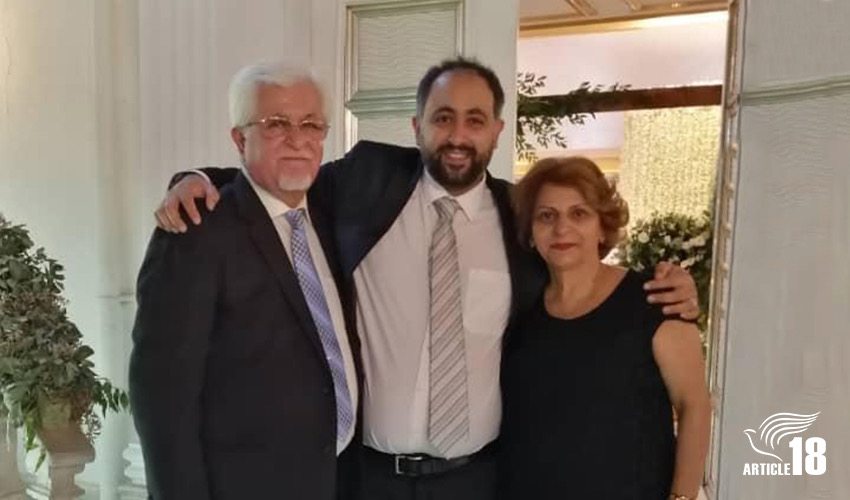 The son of an Assyrian-Iranian couple facing years in prison for their Christian activities has been summoned to serve his own four-month sentence for “actions against national security”.

Ramiel Bet-Tamraz, who is 35 years old, is the son of pastor Victor Bet-Tamraz and Shamiram Issavi, who are facing ten and five years in prison, respectively.

He must submit himself to Tehran’s Evin Prison by tomorrow.

Ramiel’s sister, Dabrina Bet-Tamraz, who now lives outside Iran, has been an outspoken advocate on behalf of her family and other Iranian Christians.

She told Article18 her brother was “staying strong for everybody” but that his three months in prison – Ramiel has already spent one month in detention, which will be deducted from his sentence – will be hard for him and for the rest of the family, and particularly for his wife, Ninebra.

“It’s really tough on her,” Dabrina said. “Really really hard. To see your husband go through imprisonment, pain, not to be able to be with her for three months, and for nothing, because he’s done nothing… If he was a criminal and had done something wrong, we would understand it, but just for having a picnic with other Christians? It’s unjust.”

Ramiel was initially arrested alongside four other Christians on 26 August 2016, as they picnicked together in the Alborz Mountains north of Tehran.

Two of the other Christians, Hadi Asgari and Amin Afshar-Naderi, were later sentenced to ten and 15 years in prison, respectively, while Amir-Saman Dashti, like Ramiel, received a four-month sentence.

Dabrina said that while her brother’s sentence seems comparatively short compared to those given to other Christians, including her parents, “spending even one day in prison, for someone who has done nothing wrong and committed no crime, is a great injustice, and as a family of course we feel worried and anxious, and those three months are going to be very long for him and for us”.

Dabrina’s parents are due to appear in court for their latest appeal hearing on 24 February, when Ramiel will have served about half of the remainder of his sentence. However, their case has been dragging on for years now, and several prospective hearings were postponed last year – the last one, in November, supposedly because the court was “too crowded”.