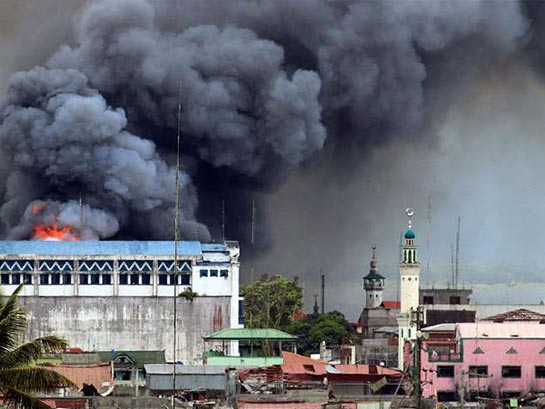 The Philippine government is dawdling in its rebuilding of the battle-ravaged Philippine city of Marawi, which means 100,000 people are still displaced after it was left in ruins by an invasion of Islamist extremists.

In May 2017 about 100 Islamic State-allied extremists entered the city in the Mindanao region of the southern Philippines, burning and ransacking churches as they tried to take control. Government troops took about five months to defeat the Islamists and 1,000 people, mainly extremists, were killed. The heart of the city itself was reduced to rubble.

In the attack Christians, who are in a minority in Mindanao, the only Muslim-majority region of the Philippines, were specifically targeted and held as hostages.

About 350,000 people were initially driven out of the southern city and despite government promises to rebuild, almost a third are still displaced. Most of these are staying with family members outside the city but at least 13,000 are languishing in squalid shelters and “tent cities”.

The displaced families say that government rebuilding work has stalled and not enough humanitarian aid is getting through. A $61 million UN-led appeal for Marawi in 2018 was reportedly only one-quarter funded.

Some of the displaced have been supplied with business starter kits and others are employed on a humanitarian cash-for-work programme, but aid is irregular and the people are desperate.

The government body tasked with rebuilding the city, dubbed Task Force Bangon Marawi, has promised to complete reconstruction by December 2021.

The organisation’s chairman, Eduardo del Rosario, recently said search teams would clear unexploded bombs by the end of August, while demolitions and debris removal will be complete by the end of November.

Earlier this year, a cathedral on the Filipino island of Jolo, capital of Sulu province, was bombed killing 20 people and injuring at least 100. The attack on Sunday 27 January 2019 was believed to be the responsibility of Abu Sayyaf, an IS-linked militant group active in Mindanao for decades.

The 2018 Memorandum of Agreement for the Autonomous Region and the introduction of Bangsamoro Basic Law, including elements of sharia (Islamic law), was an attempt by the government to find a political solution to end decades of fighting between Muslim jihadi groups and the army in the majority-Christian country. The agreement effectively created an Islamic sub-state within a secular, pluralistic and mainly Christian country. When this was first proposed in 2008, the Supreme Court ruled that it was unconstitutional, and Muslim armed groups responded with violence against Christians, killing some and displacing others.