Pray for Kyrgyzstan as Plane Crashes into Village 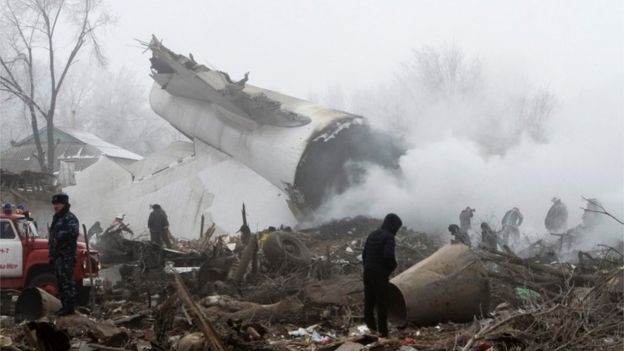 A Turkish cargo plane flying from Hong Kong has crashed into a village in Kyrgyzstan, killing all four crew and at least 33 people on the ground.

The Boeing 747, operated by ACT Airlines, a subsidiary of Turkish Air, crashed as it was about to land in freezing fog at Manas airport, 25km north of the capital, Bishkek. It was stopping at Manas en route to Istanbul in Turkey.

At least 15 buildings were destroyed in the village just outside the airport, with a number of children reported to be amongst the dead.

One resident told BBC news she heard “a roar and (what felt) like an earthquake. “Many people were sleeping, everything around was burning. One of the parts of the aircraft fell on our neighbour’s house. She and her whole family died.”

ACT said the plane had no record of technical faults and had not encountered problems during its flight. Meanwhile the Kyrgyz Deputy Prime Minister said on state TV: “According to preliminary information, the plane crashed due to a pilot error.”

Turkish President Recep Tayyip Erdogan called his Kyrgyz counterpart, Almazbek Atambayev, to express his sadness at the loss of life, and Kyrgyz authorities have declared a day of mourning for today, Tuesday 17th January.