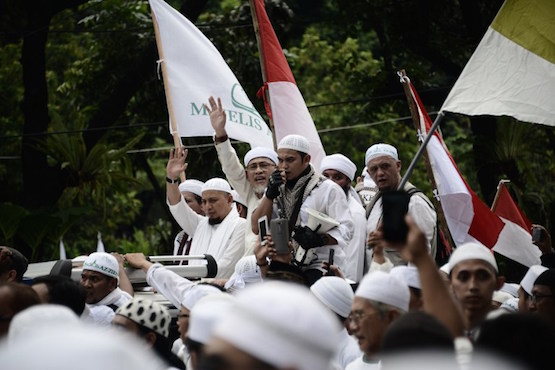 A large number of fundamentalist Muslims are expected to join a rally in Jakarta today,  December 2nd, to once again protest against the Christian governor of Jakarta who they accuse of blasphemy.

Muhammad Rizieq Shihab, counsellor of the National Movement to Safeguard the Indonesian Ulema Council’s Fatwa, said this rally against Governor Basuki Tjahaja Purnama, commonly known as Ahok, would be peaceful.

Shihab, who is also patron of the Islamic Defenders Front, told tempo.co, “The rally will be in the form of a mass prayer gathering.”

Shihab said his movement to safeguard the Indonesian ulema council will not take responsibility for any other rallies besides the mass prayer gathering, which is to be held at the National Monument Square in Central Jakarta.

“If there is a rally held outside the venue, we have agreed the national police have the right to take pre-emptive measures,” he said.

According to National Police spokesman Inspector General Boy Rafli Amar, around 10,000 workers from the Confederation of Indonesian Workers Unions will also hold an anti-Ahok rally in front of City Hall.

Police are deploying 22,000 security personal on the day.

The rally follows a large protest by around 150,000 hard-line Muslim groups on November 4th, which demanded Ahok’s arrest for alleged blasphemy. One person died and at least 100 were injured in violence associated with this rally, and Christian and Chinese owned property was attacked and looted, according to media reports.

Blasphemy allegations against the Christian governor, who is of Chinese descent, surfaced in early October, after a video of a speech, in which he allegedly insulted the Quran, went viral on the internet.

The police charged Ahok with blasphemy on November 16th, and the Attorney General’s office announced on November 30th that it approved the case. The charges mean that the governor could face up to five years in prison if found guilty.

Isaiah 32 vs 18: “My people will live in peaceful dwelling-places, in secure homes, in undisturbed places of rest.”