Refugee Crisis in Mediterranean Sea Far From being Over

During the course of Thursday, the Italian navy and coastguard reported that they rescued about 4,500 migrants from dozens of small boats in the Mediterranean in just one day. 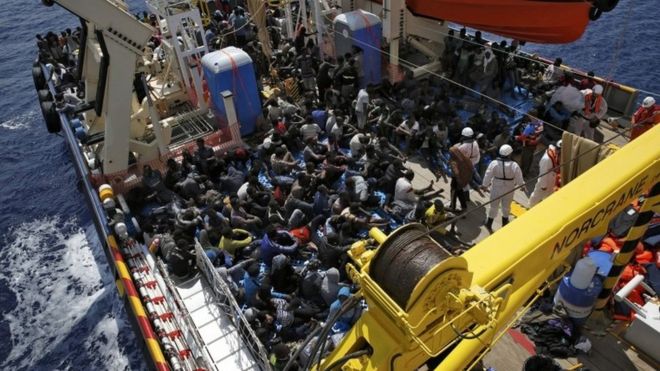 More favourable weather conditions have resulted in a major increase in the number of people leaving north Africa to attempt the crossing to Italy. Many of the unseaworthy boats were spotted about 40km (25 miles) from the Libyan coast.

“We saved a total of about 4,500 people in about 40 rescue operations,” a coastguard spokesman told AFP news agency. He added that the operations were continuing and the number might still rise.

An agreement earlier this year between Turkey and the European Union to halt migrants from travelling to Greek islands has reduced boat arrivals by 98% during the first five months of the year, compared with the same period in 2015, according to the International Organization for Migration (IOM).

However, arrivals in Italy continue at about the same rate as last year and many more were expected to attempt the crossing over the summer months.

Zechariah 7 vs 9 – 10: “This is what the Lord Almighty said: “Administer true justice; show mercy and compassion to one another. Do not oppress the widow or the fatherless, the foreigner or the poor.“