Sat-7 Beams a Message of Hope into Syria.

A SAT-7 Christmas broadcast from the battered Christian quarter of Old Homs in Syria has shown a community starting to get back on its feet after a two-year siege. 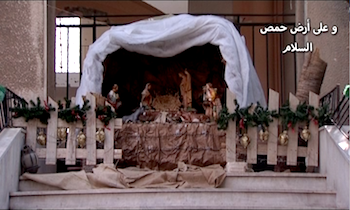 Al-Hamidiya was one of the many Old City districts returned to Syrian government control in May 2014. Meanwhile, the last rebel-held area of the city was surrendered on 9th December 2015.

The programme, shown on SAT-7’s Arabic channel, combines interviews with leaders of Homs’ community, made up of diverse congregations with a united Christmas morning celebration. All speak of a common goal: to share the joy and hope of Christ’s coming.

In one bomb-damaged church, a manger and Christmas tree are dug out from the rubble. In another, where only the walls remain standing, weddings and communion services are being held under an open sky.

Fr Abdallah Kamaz, Head of the Greek Catholic Church, said: “We insist, despite the hurt and pain and ruin, that we return to our Archbishopric and rebuild it. We insist on sending out a message that from under the rubble we are coming out to be born again with Jesus Christ.”

Fr Jihad Nassif, Head of the Maronite Church in Homs, told SAT-7 he had come to live in Al-Hamidiya “to plant hope in people’s hearts”. The process of rebuilding a city is not an easy task, he says.

In his introduction to the service Fr Nassif told worshippers, “We are all running to seek safety and security in the world, but it is Jesus that says He will give us peace.”

John 14 vs 27: “Peace I leave with you; my peace I give to you. I do not give to you as the world gives. Do not let your hearts be troubled, and do not let them be afraid.”