Ten days after officials in China’s coastal Zhejiang province released a notice detailing the forced removal of a pastor from his position at China’s largest government-sanctioned church, the pastor was taken into custody last week and placed under “residential surveillance in a designated location.” 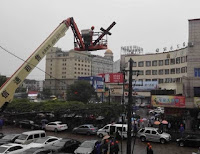 In addition, family members believe that the pastor’s wife, whom they have been unable to contact, was also taken into police custody.

According to a document released to China Aid on 18th January, by the local TSPM and China Christian Council (CCC), Pastor Gu “Joseph” Yuese of Hangzhou’s Chongyi Church, was forcibly removed from his position as pastor because of his public opposition to the hundreds of forced cross demolitions carried out throughout Zhejiang since early 2014.

China Aid learned of Gu’s arrest after family members and staff at Chongyi Church were unable to contact him last week. On Thursday, they received an official notice stating that Gu was placed under “residential surveillance in a designated location,” a situation commonly known by experts as a black jail. A formal arrest notice is expected to follow.

Gu currently serves as a member of the standing committee of the nation’s CCC, and is the current chairman of the Zhejiang Provincial CCC. He has served as the senior pastor of Chongyi Church for more than a decade.

“His arrest marks a major escalation in the crackdown against those who oppose the forced demolition of crosses,” China Aid Founder and President Bob Fu said. “He will be the highest-ranking national church leader arrested since the Cultural Revolution.”