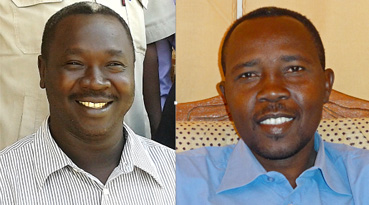 Christians in Sudan praise the Lord for the release today of Rev. Hassan Abduraheem Kodi Taour and Mr Abdulmonem Abdumawla from prison in Khartoum.

They were arrested in December 2015 with Rev. Kuwa Shamal Abazmam Kurri and Mr Petr Jasek, a Czech national. All four were charged with “espionage”,  “inciting strife between communities” and several other offences.

On 2nd January 2017 Rev. Shamal was acquitted of all charges.

On 29th January 2017 the court sentenced Mr Jasek to life imprisonment for espionage, six months’ imprisonment for spreading rumours undermining the authority of the state, a fine of 100,000 Sudanese Pounds (approximately US$16,000) for undertaking NGO work without a permit, and to one year’s imprisonment for each of the following charges (sentences to be served consecutively): inciting strife between communities; entry into and taking photos of military areas and equipment; and illegal entry into Sudan. However, he received a presidential pardon and left Sudan on 26th February.

On 29th January 2017 Rev. Hassan Abduraheem Kodi Taour and Abdulmonem Abdumawla were each sentenced to ten years’ imprisonment for abetting Mr Jasek in the crime of espionage, and to one year’s imprisonment each for inciting strife between communities and spreading rumours undermining the authority of the state (even though the legal maximum penalty for this last crime is six months’ imprisonment). All of these sentences were to be served consecutively. Since that date they have been serving their sentences in prison while their lawyers appealed against the verdict.

The two men were released from prison this afternoon (local time in Sudan) after a presidential pardon.

Christians in Sudan rejoice at their release and request prayer:
a. that Rev. Hassan Abduraheem Kodi Taour, Abdulmonem Abdumawla and their families will know the Lord’s restoration, peace and joy after their release from prison
b. for an end to the increasing pressure against churches and other religious minorities in Sudan, and that they will know the peace of the Lord
c. that all officials involved will be touched by God’s love and will change their ways