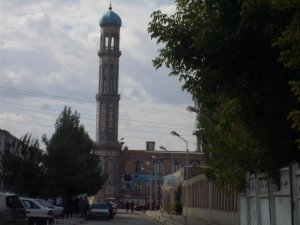 A ban by the government of hard-line President Emomali Rahmon on the opposition Renaissance Party of Tajikistan (IRPT)  has caused growing concern both within and outside the country.

In its January 11 report, the Brussels-based International Crisis Group said: “Given its problems, Tajikistan should be a conflict-prevention priority for the international community … The 1997 peace agreement masked rather than resolved tensions after a brutal civil war … and is unravelling.”

Rahmon’s 20 year rule has been marred by corruption, violence, and economic tumult, while security in the country – which shares a 1,400km-long border with Afghanistan – is increasingly deteriorating, the report said.

Ever since a peace agreement ended a five-year civil war in 1997, Rahmon’s government has cracked down on both religious and political opposition in the country, and in December, Tajik lawmakers voted to give Rahmon the title “Leader of the Nation”, granting him and his family lifelong immunity from prosecution.

But problems continue to arise in the mostly Muslim nation of 8.2 million people.

Mahmudjon Faizrahmonov, an IRPT spokesman, told Al Jazeera that renewed unrest appears to be on the horizon.

Religious repression is also causing security concerns. Reports indicate that hundreds of Tajiks have left and joined Islamic State of Iraq and the Levant (ISIL) fighters.

Zechariah 9 vs 10: ” … and he shall command peace to the nations; his dominion shall be from sea to sea, and from the River to the ends of the earth.”