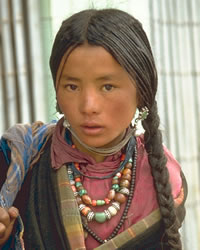 In March of 1959, 100,000 Tibetans fled from Tibet into Nepal, Bhutan, and India as a result of the Communist Chinese occupation. Today, thirty-five years later, many Tibetan refugees still live in these countries.

Tibetans are generally very proud of their heritage. In fact, most of them have not assimilated culturally into the nations where they have settled, but have maintained their traditional practices. However, many Tibetans, especially the youth, have been heavily influenced by the western culture.

Tibetan Buddhism dominates the culture of the Tibetans who live in Nepal. They worship their king, the Dalai Lama, considering him a god. He serves as both their spiritual and political leader. Tibetans are very dedicated to their religious beliefs. Prayer flags, stupas (dome-shaped monuments used to house Buddhist relics), prayer beads, and prayer wheels are a common sight all over their region.

Although many of the Nepali Tibetans have heard the name of Jesus and have some awareness of Christianity, they still do not have a clear concept of the Gospel. As a whole, they remain antagonistic and resistant to any type of Christian witness. The demonic side of Tibetan Buddhism is very real and can only be battled through prayer.

* Ask God to raise up prayer teams who will begin breaking up the soil through intercession.
* Pray that the doors of Nepal will soon open to missionaries.
* Ask God to encourage and protect the few known Tibetan Christians in Nepal.
* Pray that these believers will have opportunities to share Christ with their own people.
* Ask God to open the hearts of Nepal’s governmental leaders to the Gospel.
* Pray that God will set these Buddhists free from the bondage of fear.
* Ask the Lord to raise up strong local churches among the Tibetans of Nepal.