Uganda: Refusal to convert to Islam ends in family tragedy 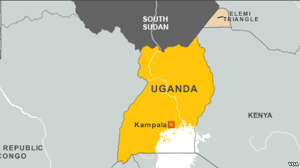 A Christian woman has been brutally attacked with a machete by her Muslim husband for refusing to convert to his religion, sources told World Watch Monitor. The attack led to the death of the woman’s one-week-old twins.

Regina Navatovu, 35, lived with her husband, Asuman Sekidde, in Bumogolo village in the south of Uganda. When Navatovu conceived in 2017, Sekidde claimed the children were not his and accused his wife of having an affair. Sekidde had started to threaten to hurt his wife before moving to Kalangala, more than 100km away, in Lake Victoria.

The twins were born on 18 December and Navatovu made contact with her husband to let him know. Sekidde returned on 22 December and that night attacked his wife and the newly-born children with a machete.

Neighbours helped take the mother and children to a local hospital. One of the twins died from a loss of blood, the other was unable to be kept warm by the unconscious mother and died from hypothermia, reported the Ugandan Daily Monitor. Navatovu lost her right hand and some fingers from her left hand in the attack.

Dr. Mark Juuko, a spokesman for Masaka Hospital, told local media that Navatovu was “still very weak and deeply traumatised”. He added that she was able to explain what happened but needs “much emotional support”.

“The local media reported that this was a case of proven adultery, but the real issue was not the paternity of the babies, it was about faith,” World Watch Monitor’s source said.

“Soon after they married, Sekidde started trying to get [his wife] to convert to Islam, but she kept resisting. This caused many disagreements between them. He only used the pregnancy as an excuse to try to get rid of her. In the recent past we have noticed an increase in domestic violence cases in households where Christian women are married to Muslims,” the source added.

Sekidde has been arrested and charged. He allegedly confessed to local reporters that he “hatched the attack [on his wife] hours before executing it”, and that he “wanted to cut off all [her] hands to teach her a lesson”.

Uganda is just outside the top 50 countries where persecution of Christians is most severe, according to the charity Open Doors’ 2018 World Watch List. The rise in radical Islamic activities in Uganda has created an environment of intolerance in the country, leaving Christians fearful of persecution, Open Doors said in its latest report.