Amnesty International have released their annual report providing a comprehensive overview of conflict and human rights abuses in 160 countries. What is striking is the suffering caused by conflict in the Middle East and North Africa, with millions of people made homeless and many violations of human rights occurring in Syria, Libya, Iraq, Gaza and Sudan.

The report makes for sobering reading, the numbers telling a story all their own:

– over 190,000 Syrians have been killed and millions more are refugees. 95% of these refugees have found homes in camps in just 5 countries.

– 3 out of 4 countries studied arbitrarily restrict freedom of expression and the press, and also freedom of religious belief.

– 82% of these countries practice torture and ill treatment of prisoners.

– Over 3,400 men, women and children have been drowned in the Mediterranean sea whilst trying to reach Europe. 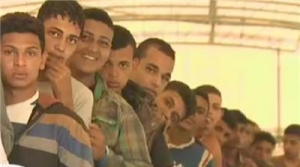 As the conflicts in the Middle East and North Africa continue unabated, the prospect for many people living in these regions looks bleak. But in the midst of this suffering, there is hope. There are many stories coming out of Iraq and Syria of refugees turning to Christ and a revival amongst believers there. There are also stories relating the steadfastness of believers in the face of extreme opposition, knowing that they have found true hope and a lasting treasure that can never be taken from them.

Psalm 65 vs 5  and 7: “You answer us with awesome and righteous deeds, God our Saviour, the hope of all the ends of the earth … who stilled the roaring of the seas, the roaring of their waves, and the turmoil of the nations.”